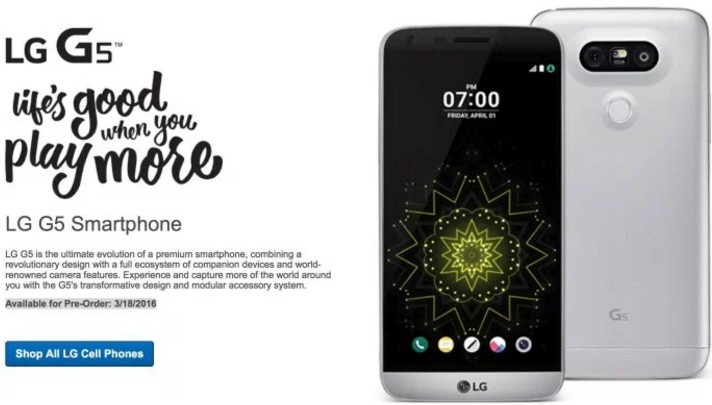 In this Mobile World Congress in 2016, LG G5 must be super star during all the smartphones. Last time we have introduced some features of Samsung Galaxy S7, this time we will unveil something big on LG G5 - the new design, new tech, other new features included.

Modular design: LG is the first to commercialise a modular smartphone. You can swap out the battery, or add in another accessory like the Bang & Oulfsen sound up-scaling amp or another giant battry taht doubles as a camera add-on. LG also hopes the modular design which has been launched in Mobile World Congress will inspire more work with LG to produce more third-party modules.

Wide angle camera: LG’s new 16MP camera module has a wide angle with a 135 degree field of view. Also, there is also a variety of extra camera modes in LG G5. It will give you more excited experience of taking photos than before.

All metal design: LG has launched the first all-metal casing, and possibly because of the modular design. LG G5 doesn’t need to have a plastic rear cover in order to access the removable battery or microSD slot.

VR heaset: Like Samsung is giving away Gear VR headsets with S7 pre-orders, LG has joined the team, too. It is launching its own VR headset, the LG 360 VR. The headset’s light has reasonable display quality (639ppi). You can use the phone as a controller.

Performance: LG G5 features a 5.3-inch 2560 x 1440 Quad HD display with a pixel density of 554 pixels per inch (ppi) and is powered by a Qualcomm Snapdragon 820 processor, Adreno 530 GPU and has 4 GB of RAM. It includes 32 GB of internal storage and a microSD expansion slot that supports up to 2 TB microSD cards, all housed in a sleek aluminum body.

Price: All 4 major U.S. Carries have officially announced they will offer the LG G5. However, the price is more confusing. None of them shared when or for how much. Moreover, the pre-order is available for the 4 carries. Also, no one said when. Recently Best Buy confirmed the LG G5 pre-order date is officially March 18th. That’s just a week after the Galaxy S7 release date.

Another tip, both LG G5 and Samsung Galaxy S7 decided not to use the Android 6.0 Marshmallow “adoptable storage” model. With adoptable storage, first of all the card may be erased the first time it is inserted into the device. This behavior may be unexpected by many users and neither of them want to see users lose their files. You can refer to the tips on how to backup your files in Android here.

After introducing the overall information of LG G5’s feature, should the LG G5 be your next smartphone?