Android’s new operating system Marshmallow now can be downloaded and updated for public. Before trying this new project, it’s very important to know the wonderful improvements in this version. In this article, we have listed top 7 features of Android 6.0. Check them now.

Different as the former versions, the new default app drawer scrolls up and down. They’re arranged alphabetically which makes finding them really easy, especially with the scroll bar on the side which quickly gets you to any particular letter.

Up at the top of the app drawer are four app suggestions that are often spot-on. If you hold your finger down on the app button on the home screen, the drawer pops up with a keyboard and a search box. Clever!

App Permissions have gotten a huge overhaul in Marshmallow, which makes Android work a little bit more like iPhone. They will ask for permission only when you need to access the app, rather than asking for permission when you install after downloading the app from Google play store. 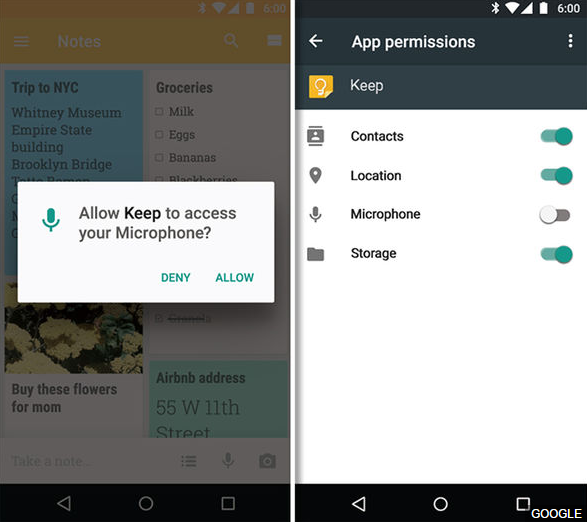 Google has made controlling app settings much easier too. Go into Settings -> apps and you can see and edit in-depth controls like notifications and permissions as well as being able to see how much battery any specific app has used since you last charged the phone.

We should admit that Google Now on Tap is getting better now. As outlined at Google’s developer conference this spring, it’s not just Android 6.0’s marquee feature. It’s the key to Google’s mobile future, one in which ducking in and out of apps is replaced by one fluid interaction. Now on Tap is helpful to manage privacy on your phone.

The new feature of Doze can manage your battery usage very well. The unique tech can effectively longer the battery life. Doze uses your phone’s accelerometer to identify when your phone is at rest. Now, when your phone is in standby, it automatically drops its battery consumption to give you up to 30% more standby time.

App Standby is a little different. It works to actively shut down apps that you haven't used in a long time (unless you're plugged in, then it's fair game). If you've done the settings dance of "disabling" a bunch of carrier apps that you don't want, think of App Standby as basically automating the process.

You can put a finger on your phone to scan. Now, fingerprint scanning is native to the operating system. So it should be available on more phones and enable easier lock screen accessibility and enhance features like Android Pay.

As reported, Android 5.0 came out last November, and after those 11 moths only 21% of Android devices have leveled up to Lollipop. Let’s guess how many of the Android users will update to Android Marshmallow. Or if you are one of them, will you choose to get an update of Android OS’s latest version?

Note: As it is the newest Android OS, many root permission is not allowed. If you need to root your Android 6.0, keep eyes on our blog. We will update at the first time when it’s available.